Noem’s pandemic response isn’t all that it’s cracked up to be. 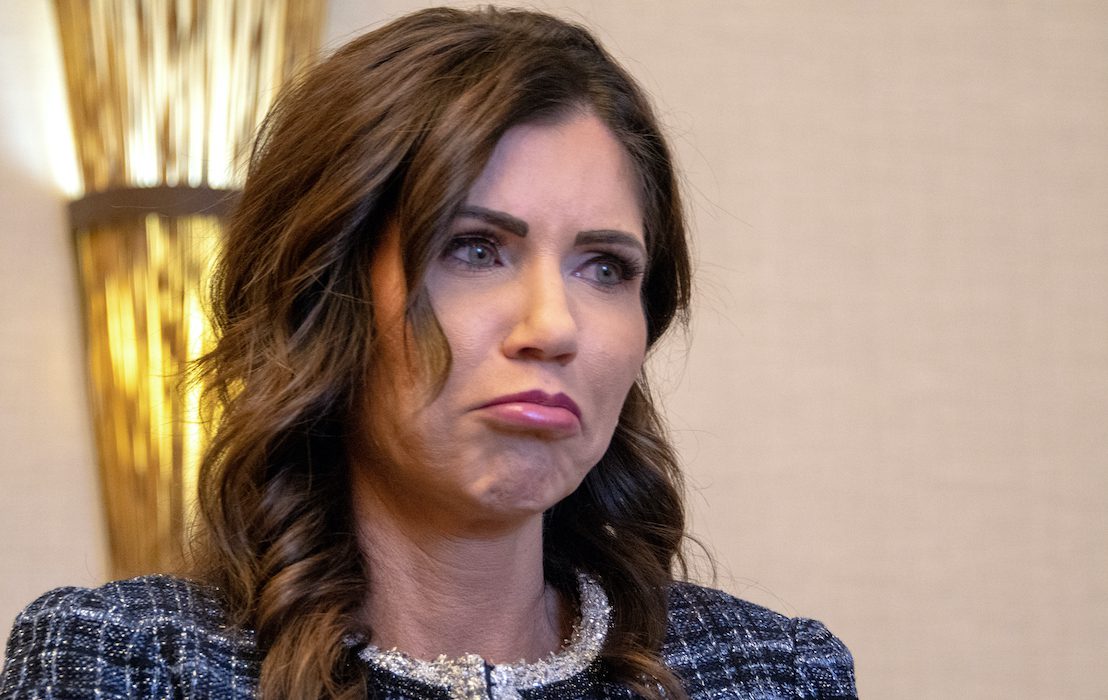 As controversy swirls about her, Gov. Kristi Noem of South Dakota is trying to prevent her presidential aspirations from being flushed down the drain by touting her anti-lockdown approach to Covid-19. But Noem’s pandemic response isn’t what she and her defenders make it out to be.

Noem stepped into the political limelight because of her purported refusal to lock down the state of South Dakota during the Covid-19 pandemic. At the same time, this newfound notoriety has illuminated a number of scandals—often published, then pilloried, by social conservatives—that she continues to deny. To keep her 2024 chances alive, Noem and her defenders pivot to her Covid record, lashing out at other Republican governors considered 2024 contenders while doing so.

However, Noem has received undue credit for keeping South Dakota “open for business” (the bigger the better, in her opinion) because she was clearly laying the groundwork to implement stricter Covid-19 policies before the state legislature prevented her from doing so in the early stages of the pandemic.

When South Dakota was the only state to refuse to implement lockdowns or mandates, Noem-mania quickly took root. Noem even placed second in CPAC’s 2024 presidential nominee straw poll that did not include former President Donald Trump.

In her keynote address at that CPAC convention in Florida, Noem boasted, “South Dakota is the only state in America that never ordered a single business or church to close. We never instituted a shelter-in-place order. We never mandated that people wear masks. We never even defined what an essential business is because I don’t believe governors have the authority to tell you your business isn’t essential.”

“In South Dakota, I provided all the information I had to our people, and then I trusted them to make the best decisions for themselves, for their families, and in turn, their communities,” Noem continued. “I believe South Dakota has been an example to the nation this past year,” she said in conclusion.

At another CPAC conference speech, this time in Dallas, Texas, Noem seemed to take a swipe at Florida Gov. Ron DeSantis, the man who beat her in the aforementioned CPAC straw poll. “Let’s talk about rewriting history. We’ve got Republican governors across this country pretending they didn’t shut down their states, that they didn’t close their beaches, that they didn’t mandate masks, that they didn’t issue shelter-in-places,” Noem said.

Noem assured the audience that she was “not picking fights with Republican governors,” but then added, “All I’m saying is that we need leaders with grit, that their first instinct is to make the right decision, that they don’t backtrack, and then try to fool you into the fact that they never made the wrong decision. So demand honesty from your leaders. Demand honesty from your leaders and make sure that every one of them is willing to make the tough decisions.”

Noem is exactly right, but she shouldn’t be throwing stones from a glass house.

This is not in reference to recent allegations from “multiple” unnamed sources published by American Greatness about Noem and former 2016 Trump campaign manager Corey Lewandowski.

Nor is it about Noem allegedly using her station to enrich members of her own family. The governor apparently hired her daughter, Kennedy Noem, for her transition team in 2018 while still in college. The younger Noem ultimately received more than $17,000 in raises over two years despite a wage freeze placed on state employees. Noem also allegedly pressured state employees to rethink their denial of a real estate appraiser application submitted by Kassidy Peters, Noem’s other daughter, and placed Kyle Peters, her son-in-law, in the governor’s Office of Economic Development, where he took home a $55,000 salary until leaving the post in June 2021.

Then there’s Noem’s “style-and-form” veto of House Bill 1217, a law she once claimed she was “excited to sign” and would have protected women’s sports in South Dakota from encroachment from biologically male athletes. Many, such as The American Conservative’s own Rod Dreher and Fox News‘s Tucker Carlson, believe the move amounted to caving in the face of the NCAA, Amazon, and other monied interests in the state, which Nate Hochman has written about extensively over at National Review. In response to criticism for her handling of House Bill 1217, a Noem spokesman told National Review:

“Anyone who knows or has worked with Governor Noem knows that the buck stops with her. Nobody is making decisions for her. As an example, I promise you that Sanford Health has not always loved the Governor’s freedom-first approach to the COVID pandemic. Remember, she is the only governor in America who never ordered a single business or church to close. She never mandated masks or shut her state down. And she often butted heads with Sanford leadership as a result of that.”

No, I’m not talking about that either. Rather, I’m talking about Noem’s bread and butter—her Covid-19 response that her office was so eager to remind National Review of.

Even though South Dakota’s churches and businesses stayed open, it wasn’t for a lack of Noem trying to initially shut them down. In a July Substack post from Director of Policy and Government Affairs for the American Principles Project Jon Schweppe, Schweppe claimed that Noem encouraged South Dakota Rep. Lee Qualm to introduce House Bill 1297 in late March of 2020. The bill, according to Schweppe, “would [have] declare[d] a state of emergency in South Dakota and give[n] the Secretary of Health unprecedented powers to impose mandates and lockdowns, allowing for the placement of ‘reasonable restrictions’ on any public or private location, including a ‘business, park, school, or other location that promotes public gathering.’”

When it came time for South Dakota’s House of Representatives to vote on House Bill 1297, the legislation was overwhelmingly rejected by a vote of 50-17.

While the legislature did not grant Noem’s administration the authority to impose stricter Covid-19 precautions, Noem did take advantage of authority already granted to her office to bring public and private institutions into compliance with Centers for Disease Control and Prevention (CDC) Covid-19 policies by signing multiple executive orders.

On March 13, 2020, Noem declared a State of Emergency in South Dakota, which sensibly suspended certain regulations to ensure South Dakotans received materials and relief as needed. The executive order also granted a large amount of authority to the South Dakota Department of Health to “control and contain the spread of COVID-19.”

Ten days later, Noem signed Executive Order 2020-08 on March 23, 2020 that encouraged citizens, businesses, and municipalities throughout the state to follow CDC guidelines, such as restricting the size of public gatherings and “suspend or modify business practices as recommended by CDC guidance.”

It is true that these executive orders lacked enforcement mechanisms and did not create mandates, but they do make clear that Noem was attempting to expand her powers to conceivably devise stricter Covid-19 policies—even before Noem’s failed attempt to proposition the legislature for more power.

Two more executive orders signed by Noem on April 6, 2020 also lacked a system of enforcement or penalties to qualify them as mandates. However, both invoked South Dakota’s State of Emergency to justify using more severe rhetoric to garner private and public compliance with CDC guidance. Whereas Executive Order 2020-08 suggested South Dakotans “should” take pandemic precautions recommended by the CDC, Executive Order 2020-12 replaced 2020-08 and said citizens, localities, and businesses “shall” follow CDC Covid-19 guidelines. Executive Order 2020-13 ordered “vulnerable individuals” in Minnehaha and Lincoln Counties, two of the three largest counties in South Dakota that contain a quarter of the state’s population, to “stay at home or a place of residence if possible.” If such South Dakotans found these circumstances stressful, the order encourages them to “take deep breaths, stretch, or meditate.”

Sure, Noem deserves some credit for not bucking the will of her constituents and the legislature by going forth with more stringent Covid-19 policies, which certainly saved the state human suffering—especially compared to the devastation wrought in states with long lasting lockdowns like California and New York. But, not being a Covid despot is the bare minimum of what conservatives should expect from any Republican governor hoping to run in 2024. I would even venture to say that Republican voters would opt for a candidate that was more hawkish on Covid-19, but demonstrates they are “willing to make the tough decisions,” when it comes to key issues of immigration and culture, big tech, and woke capital over Noem, who has failed to do just that.

In Praise of Country Living